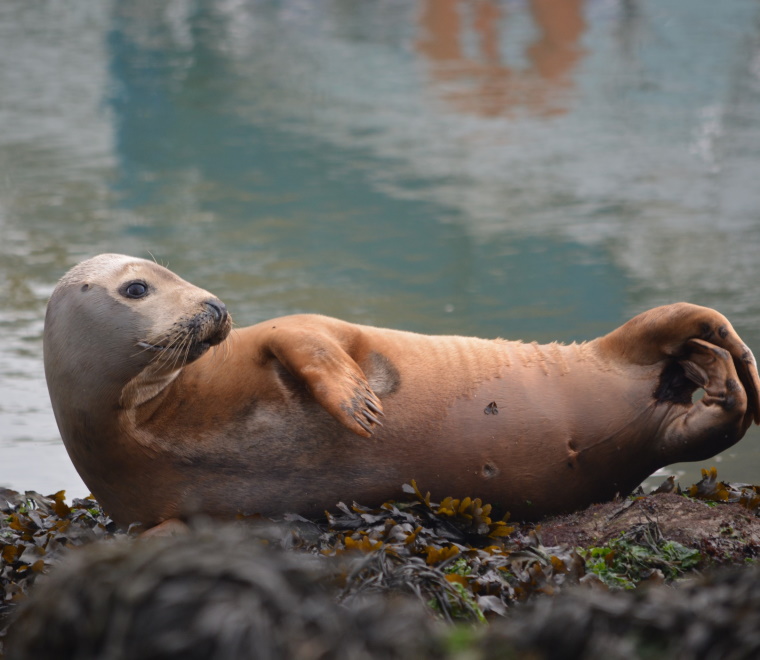 Here are 10 things you might not know about grey seals. Part of our Did You Know? series.


On Friday evening a juvenile grey seal decided to haul out near our offices on Town Quay. Andy Pearson, Marine Mammal specialist at ABPmer, took this excellent shot.

Grey seals are only sighted infrequently in Southampton Water (transiting from the nearest breeding colonies in South Devon and the Thames Estuary). It’s rare for them to haul out in this region and even rarer in such a populated area! Harbour seals are more common in the region with a small breeding colony in Chichester Harbour.

10 things you might not now about the grey seal…

1. Grey seals have been known to dive to depths of 300m and stay underwater for up to 20 minutes

2. Grey seal milk contains up to 50-60 % fat. This is more than ten times the amount found in human or cows milk and helps the pups rapidly develop a layer of blubber.

3. Male grey seals in Scotland have recently been recorded killing and eating pups. This killing has produced a spiral laceration ‘corkscrew injury’ which had previously been blamed on vessel propellers. One cannibalistic male on the Isle of May was recorded killing 14 seals this way with 12 of these partially eaten!

4. Grey seals can end up in some odd places on their travels. In 2014 a seal was rescued from a farmer’s field more than 20 miles inland having travelled up the River Mersea and then up a brook.

7. Pups are born with a white coat known as a “lanugo” which they moult after 2-4 weeks for a shorter adult-like coat.

8. Approximately 40% of the world’s grey seals breed in the UK and 90% of these breed at colonies in Scotland with the main concentrations in the Outer Hebrides and in Orkney

9. Grey seals regularly make long distance movements of hundreds of kilometres between haul out sites but typically show a high degree of site fidelity to one particular location with female grey seals often breeding at the colony in which they were born.

10. Female grey seals suckle pups for 17 to 23 days. Pups then remain on the breeding colony for up to two or three weeks before going to sea. Pups generally disperse in many different directions from the colony and are known to wander widely.

This article is part of our "Did You Know?" series.