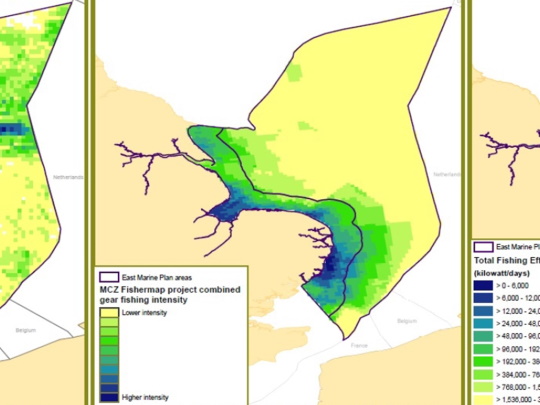 The first marine plans for England — the East Inshore and Offshore Marine Plans — were published for public consultation in July 2013. These draft plans contained a policy to protect areas of fishing activity (FISH1), yet the policy applies to the entire plan area rather than distinguishing fishing grounds of greater or lesser value. In responding to the draft East Plans consultation, some stakeholders stated their preference for a spatial marine plan policy for fishing that identifies and protects those grounds that the industry perceive to be of most value (or ‘core fishing grounds’).

ABPmer was contracted to explore the opportunities and challenges of using a core fishing grounds approach to develop spatially explicit marine plan policies for fishing activity, by discussing the implementation and potential outcomes of such as policy with relevant stakeholders.

The work included a review of fishing policy in existing statutory and non-statutory spatial plans, and an exploration of the practical implementation of such a policy with the fishing industry, relevant government agencies and departments, marine industries and other stakeholders.

Outputs included recommendations on the definition of 'core fishing grounds', benefits and limitations of such a policy development approach in marine spatial plans, and how such an approach might be taken forward.