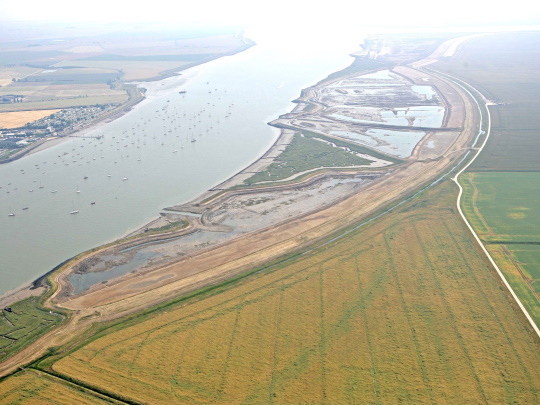 The Allfleet's Marsh Managed Realignment is located on the north bank of Wallasea Island. It was undertaken by Defra in 2006 to compensate for losses of intertidal habitat at Lappel Bank (Port of Sheerness) and Fagbury Flats (Port of Felixstowe) and was carried out with support from the landowner (Wallasea Farms Ltd) and advice from Natural England, the Environment Agency and the RSPB.

This scheme remains one of largest completed realignment schemes in Europe (115ha), and resulted in the creation of new coastal mudflat and saltmarsh as compensation for losses of these habitats that had resulted from past port developments on the east coast. The Allfleet's Marsh project was also undertaken to enhance the levels of flood protection afforded to the agricultural land behind the new sea wall.

ABPmer was commissioned by Defra and Wallasea Farms Ltd to undertake a site selection process, develop the scheme design, undertake the Environmental Impact Assessment (EIA) and also obtain the marine consents for the associated works. We also conducted a 5-year post-breach monitoring programme to understand how the site developed ecologically and physically over time and to confirm that it met its compensation targets.

We maintain a record of habitat creation and restoration projects in the UK and further afield. Visit the database.

Explore the database
We've detected that you're using an outdated Internet Explorer browser, the site might behave in an unexpected manner. To get full functionality please use a modern browser.