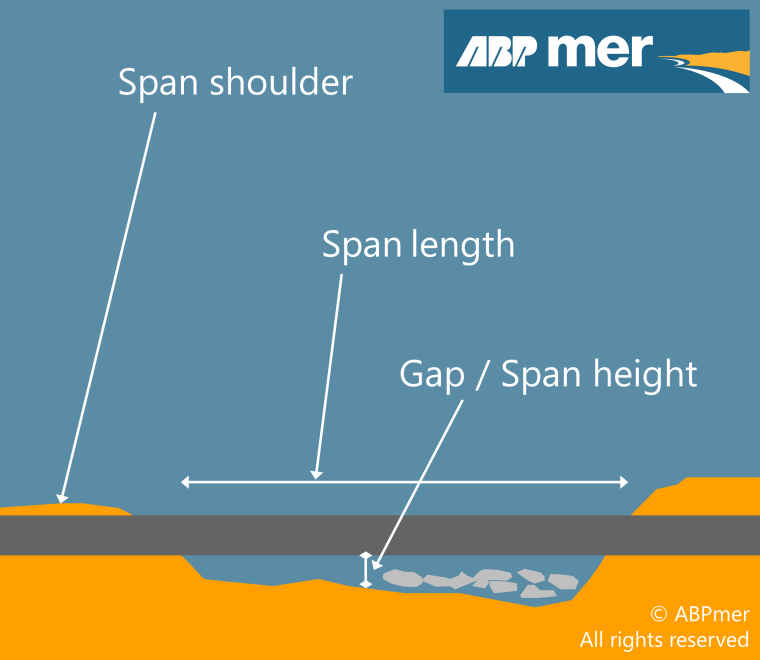 Determining the cause of a pipeline exposure takes a bit of detective work. Here's how ABPmer solved a recent free-spanning issue.


On the approach to the shoreline, pipeline assets are typically buried to a depth under the seabed at which future exposure is not expected. When a problem does occur, determining the cause of a pipeline exposure is a bit like detective work: What evidence do we have? What was the sequence of events? What is the most probable cause and what can be done to remedy the problem?

Pipeline exposure can rapidly lead to free-spanning, where the pipeline is scoured to such an extent that it hangs between two sections of the seabed. In these cases, there are generally no fast or easy options (in terms of future management) so the correct understanding about how the situation occurred, and what might happen next, is essential.

In a recent case solved by ABPmer, a pipeline had become exposed on a kilometre-long shallow sand bank located a few hundred metres from the coast. Prior to its exposure, and subsequent free-spanning, the pipeline had been happily buried for 15+ years, so why the problem now? It would be easy to jump to conclusions and assume that the sand bank had lost sediment over the years resulting in a drop in overall elevation and deepening of the seabed. This, however, was quickly ruled out, so other theories needed to be tested.

The location was at the mouth of an estuary; areas which have a notorious reputation for their shifting sands. Developing a conceptual understanding of these complex marine environments should always start with obtaining available data and information. If an area is covered by repeat high-resolution bathymetric surveys, movement of the seabed is relatively straightforward to assess through data comparison techniques.

However, problems often occur in the marine environment at locations where the wider seabed is not surveyed regularly and, in these cases, bathymetric analysis needs to be supplemented with other approaches. These approaches can either be top-down - where the seabed behaviour is compared to other similar locations e.g. comparing one estuary to another - or bottom up - where the specific marine processes that might have led to the event are simulated. The complexity of these seabed areas is a result of the interaction of periodic (e.g. tides) and episodic (e.g. storm waves) driving forces. Therefore, the application of multiple approaches is often beneficial.

To assess our recent nearshore sand bank case, ABPmer supplemented bathymetric analysis with extensive numerical modelling (tidal currents, waves and sand transport) to enhance the understanding of the marine environment at the exposure location. In addition to providing valuable information on local sediment transport patterns, the data from the models was also used to calculate fatigue wave loading on the spanning section of the pipeline, assessing criticality.

So, what caused the problem?

Careful consideration of all the available evidence showed that the overall sand bank was actually in dynamic equilibrium, i.e. whilst it had changed shape to some degree over the years, the overall form of the bank had stayed the same.

Rather than costly engineering intervention, temporary emergency measures were put in place to support the pipeline span, and the area was closely monitored by repeat bathymetric surveys. As our analysis predicted, the channel continued to migrate and eventually moved away from the pipeline and out of harm’s way. Consequently, the dynamic equilibrium of the wider bank then led to a complete reburial of the pipeline.

No two cases in the marine environment are ever the same. If you would like support with any of your marine assets, please get in touch with one of our specialists.