The asymptotic steepness method is effective for obtaining extreme wave periods, but there is a potential trip hazard.

The asymptotic steepness method is a simple and effective means for obtaining associated extreme wave periods. However, a stumbling point arises if you are not aware of the wider nature of the wave climate in the study region. 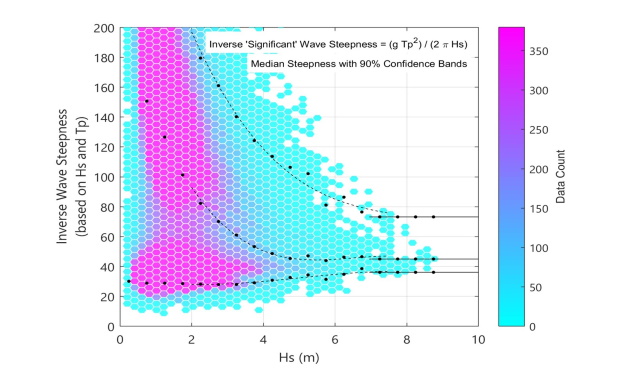 The method is ideally suited to sea states that are principally wind-sea or swell dominated (spectrally uni-modal). In such cases the median wave period and its 90% confidence values (5% and 95% steepness percentiles) are good descriptors of the distribution of wave periods associated with a single homogenous population of waves.

The aforementioned stumbling point for the unwary becomes evident in spectrally bi-modal situations where the highest sea states associated with wind-sea and swell components are of a similar magnitude. In such cases, the wave steepness associated with the spectral peak period, Tp, will select one or the other component (wind-sea or swell).

As spectral peak period is a ‘spot value’ associated with maximum wave energy it is representative of just a single value, ignoring the second, even though the second may be associated with a very similar energy.

This is not a problem in itself unless the unreported secondary Tp is of a frequency considered of importance to the engineering application in question.

As a practical example; in regions exposed to long-period swell the reported extreme median Tp may occasionally appear low, contrary to expectations. In this case local wind-seas may occupy sufficient of the upper sea states to associate themselves with the median extreme wave period.

As previously noted, Tp is a ‘spot value’ and it has no knowledge of any secondary energy associated with the remote swell system. This secondary energy information is therefore masked from us in this case.

To aid in the identification of such situations it is helpful to present confidence limits for the extreme wave periods. Long period swell waves, that may be of particular significance to floating structures, and that may be missed by viewing only the median wave periods derived from mixed sea states, may be identified through the significantly longer upper range values. By this process we have our attention drawn to the possibility of a secondary energy source that may be of consequence to our work.

This simple example emphasises the importance of understanding the underlying metocean processes likely to affect a study location. In particular, how easy it can be to miss important information when looking solely at the standard metocean statistics. The spectral peak period is particularly prone to this type of omission due to its ‘quantised’ nature.

Standard practice at ABPmer when providing metocean criteria for preliminary or final design purposes is to characterise the area of interest prior to the commencement of any data analysis. This practice can forewarn the analyst of any potential ‘trip hazards’ like that of hidden secondary extreme spectral peak periods. It is considered time well spent.

ABPmer’s Metocean team has considerable experience in a range of highly varying metocean environments around the globe. For more information about metocean services, visit our SEASTATES microsite.